The wedding of a wedding planner! 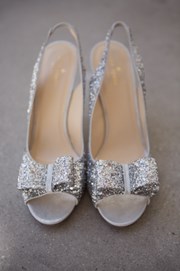 Myself (Alex) and my husband (eek!) met when I was sixteen and he was seventeen! We both worked in a place called East Street Market, in South East London. I worked in a shop selling leather jackets and coats and he worked on a market stall right outside.

I used to work weekends every winter in the shop with my mum, it was a family run business so it was like working with a big group of aunts and uncles! I started work this weekend after being off all summer and popped outside to see 'Uncle Law' on the stall outside - it was freezing cold and raining and i ran straight over to get under cover and bumped directly into a cute older guy! Let's just say my huge crush on him started there and then!

That day I was introduced to Scott about thirty times all by different people who knew us both, it'd be like 'Oh Alex have you met Scott, you two would really hit it off!' and I later found out how everybody was saying to Scott 'Have you met Alex? Get in there now mate she'll be snapped up by christmas!' HA!

So of course by the end of the weekend we had met each other a hundred times over! One of my 'jobs' was to go and get teas, coffees, sandwiches etc from the cafe for everyone so Scott and I got talking over the numerous cups of tea I delivered to him - i'd be asking everyone if they wanted a hot drink every ten minutes just for an excuse to talk to him! The joke is that Scott had never drunk so much tea in his life and I had never been so happy to get up on a Saturday morning!

As it got closer to christmas I began to despair of him ever asking me out - I figured he just wasn't interested, or that he had a girlfriend he hadn't mentioned. As it was he was just chronically shy and apparantly thought a girl as pretty and funny as myself (double HA!) would already be taken.

Christmas eve comes round and I make a big show of putting some mistletoe up at the front door of the shop - and spend the day getting pecked on the cheek by every other man I knew in the market! *embaressing!* Everybody was in the festive spirit so my manager went down the pub and bought a huge round of drinks. I got one for Scott and we toasted each other 'merry christmas' with a shandy (well we were underage!!!).

The stalls all started packing up and Scott had dissapeared so I figured he had gone home and was more than just a little bit dissapointed that my combo of tartan miniskirt, christmas earrings and mistletoe hadn't got me a kiss! A few minutes later Uncle Law's van pulled up outside, out jumped my uncle to come and wish everyone a merry christmas and Scott took the opportunity, whilst everybody was inside to call me outside for a kiss! I think a part of me actually died of happiness that day!

A few days later we were back at work (me in a different miniskirt!!) and Scott finally got up the courage to ask me for my number as it was nearly time for me to finish working the weekends and he wasn't sure when he would see me next. We arranged to meet up in the New Year and then spent the next few days texting each other constantly - I had butterflies everytime my phone beeped. It was around this point that I told my best friend that I was going to marry him!

On the 3rd January we went out on our first date - to Greenwich to see Pan's Labyrinth, walk through the park drinking milkshakes and to have dinner in an Italian restaurant. It was my first ever 'proper' date and I was so nervous - it took me hours to decide what to wear