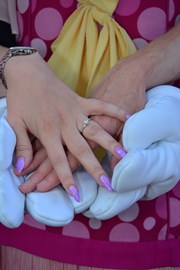 March 2018 in Your planning threads

I took inspiration from some of your lovely planning threads and thought I'd join in the fun. I hope this keeps you entertained, and I think it'll be a good way for me to keep a record of all the plans we make!

All great love stories start somewhere, and for Mr BAMF and I that somewhere was a site called Faceparty. Before I carry on, I'm pretty sure that my parents still don't know this is how we met... I was 16/17 at the time and as far as they were concerned, the internet was full of weirdos! If they do know, they've never let on, and if anyone asks, we met through mutual friends... Haha! Anyway, I got a private message from Mr BAMF saying he really liked my profile picture and hoped I didn't mind, but he'd added me on MSN Messenger (ah, the good ol' days!) as he wanted to talk to me and get to know me. I was very happy - he wasn't bad looking himself

We spoke to each other for about a month before we met in person, but things didn't quite end as hoped and we both met other people. We stayed in touch as friends and spoke from time to time, until about 3 months later when I got a message from him saying that he couldn't stop thinking about me and had even had dreams about seeing me again. I think I replied with something along the lines of "That's nice, have you told your girlfriend?" to which he replied "Yes, I have and that's why she's now my ex-girlfriend". In all honesty, Mr BAMF had never been far from my thoughts and my "fling" (if you can even call it that) had fizzled out after about 3 weeks, so this made me very excited at the prospect of what could happen.

We arranged to meet up again with the help of my best friend (and now MOH) at a local pub, and the rest is history!