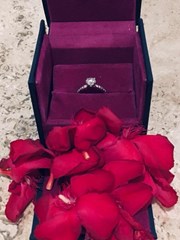 November 2018 in Your planning threads

I have been on Y&YW since we got engaged in Mexico in November 2017 and have really enjoyed reading everyone's planning threads and forums.

Now I have started to pay deposits I think that it is finally time for me to start writing my own planning thread!

Me and my H2B actually went to the same primary school and secondary school together, we were two school years apart, but didn't formally meet until he had left school and was 18, and I was in my final year of sixth form and was 16. H2B says that he remembers me in secondary school, but I can not for the life remember him (sorry babe!).

We met when I started to work in the local Co-op in the village we both lived near in July 2009, he was actually my supervisor! We actually both had BF's and GF's at this point, so nothing romantic happened for a while.

We actually used to argue quite a bit when I first started working in the Co-op (I was a bit of a rebellious worker at this point and often didn't do what he told me too), fast forward to February 2010 and we had our first date (sitting in one of our bedrooms watching a film), after this he asked me to 'go out with him' and we have been together ever since!

I left the Co-op in September 2010 when I left to go to the University of Reading to study law. The three years apart were really hard, but it was only an hour drive from home and I was lucky enough to have my car, so we saw each other nearly every weekend. Funnily enough I am now a Tax Advisor so do not really use much of my legal learning's in my day to day life!

H2B left the Co-op in 2011 to pursue a career in Accountancy, so we are still in pretty similar work fields.