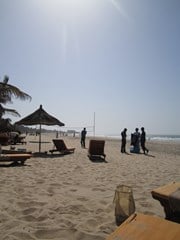 SO, this is going to be a long story (Im very sorry!)

The OH and I have been together for nearly 4 years, we get married next August. We have been living together 2 years and engaged 18 months. We have known each other nearly 6 years.

My parents have been together happily for nearly 40 years. The OH parents arent married but have been together for over 20 years (The man he calls dad, isnt his real dad, but has been there since he was 18 months old - his real dad had very little to do with him and was a nasty man by all accounts). Both his 'Dad' Colin and mum have both been married before but were both in quite awful marriages, so neither believe in the truth of marriage at al, which is fine.

When we moved into together 2 years ago, his parents turned their backs on us - although were really excited for us before we moved in - The MIL even went as far as threatening my family and calling me a sneaky, evil bitch. We had never had a problem before. His 'dad' Colin then stated that they would have nothing more to do with either us. My OH was devastated, absolutely beside himself about it all.

We let this all settle, his family were then prepared to speak with us again - his sister however refused to be part of the wedding, even stating that she wasnt coming because she hadnt been asked to the wedding personally - SHE IS THE GROOMS SISTER - of course she would be coming, she doesnt even need an invititation!? She didnt speak to him for a long time. Eventually they kind of made up.

Fast forward 6 months to December 2012 and the MIL became really unwell - had to have 3 discs removed from her back and was tested for Cancer and was quite poorly. Despite everything, the OH and I suppported them through everything. My OH worked all the hours under the sun to give them money to be able to pay for christmas - but never once got a thank you for any of it. Obviously, he didnt do it for the thanks, he did it out of loyalty and because he loves them.

The MIL then confessed she saw a different side to me during this time - a side of me that has always been there, she just didnt care to get to know me - and we were on good terms. She stated she didnt want to know details about the wedding just let me know when things are booked. Fine. Thats ok.

So, fast forward another 9 months to september 2013 and we get a phone call from the MIL saying she is being completely left out of the wedding and no one is telling her anything and I tell my mum more than I tell her.

Firstly, I am only doing what she asked of me in the beginnning. Nothing has been booked, Im merely looking at details. Details she confessed to not caring about.

Secondly, my mum is my mum and best friend. I will never have the relationship that I have with my mum with her... It just doesnt work - especially after some of the things she has said to me in the past. I dont trust her at all but keep my mouth shut.

She also turned round to me and said that she doesnt like my OH at the moment (her own son) because he doesnt even buy her a cup of coffee at the moment. And that his brother (half brother by his 'dad' Colin) doesnt like him either because he makes no effort with him. Lets point out, my other works shifts as a nurse - finding time to see them is hard but they never make an effort with him.

We went to see them last night, which we arranged. The OH took his brother out the week which the OH arranged. and He took his mum out recently, which he arranged. They are all adults but seem to pin all their problems on my OH. Why dont they make the effort, and why is it my MIL seems to just stir problems in the family, rather than trying to solve them???

I am at my wits end, because it breaks my OH heart and its horrible to see him so upset. He a