Can you uninvited guest 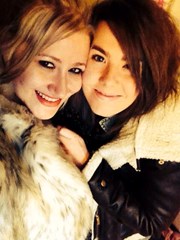 I need some advice. Me and my other half decided to cut our guest list to have the venue we loved. I have cut people's +1 as would rather have the people that mean something to me then someone's boyfriend or girlfriend. I also cut a few cousins from the day and all second cousins bar two.

My save the dates went out last year and can hostley say the guest list hasn't changed since.

However my cousin got a new boyfriend shortly after the save the dates went out. I have not include him on the actual invertation as I have never met him and it cost about £100per a head if you include day/evening food and wine. This cousin that has a new bf if the person I made an acception for to bring her kids and only invited them as I knew she would kick off not because I want them there.

Yesterday my auntie (her mum) starting messaging asking if he was invited as his name was not on the invite.  I was very polite and said due to numbers and cost I can't afford to pay for someone I never met.

She kept going on and was being pretty nasty to me. I informed her not all my cousins got an invite and no second cousin bar her children did get invited however she was not satisfied.

She went on about how would I feel if thy didn't invite my partner to a family event. At this point I stated it was not a family event it is my wedding. Her classing it as a family gwt together annoyed me as it shows she doesn't actually care about why I'm getting married.

My auntie then put a couple of bitchy Facebook status saying I don't care about her daughters feeling and then about how he's disappointed with her family and how I shouldn't past judgement on someone I havent met.

This annoyed me as I had considered her daughters feelings and not once judged him just said he couldn't come. She is being really childish over the matter. Most people have asked then went told no have been like okay.

I feel she is creating drama, something I don't wish to have at my wedding. Also I feel she doesn't care about me or my feelings/the actual marriage.

I don't want her, her daughter or her kids there. Can I uninvite them/ how?