Anyone else had plans scuppered by the weather? 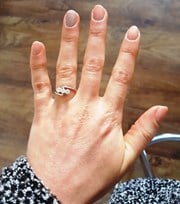 It's supposed to be my hen do this weekend (Fri-Sun). As we're getting married in Glasgow but live in Yorkshire, I took today off work too so that I could head up early and get some wedding stuff done, then go to the hen with my mum.

Now I can't get to Scotland today at all, which means the registrar, florist and makeup trial all have to be cancelled. We're not sure if the hen can go ahead due to the location - I don't know exactly where it is but it's off the main roads. We're going to make a call tonight on either changing it to Saturday only, or cancelling completely. People will lose out on what they've paid either way.

I'm gutted that my big exciting weekend of wedding stuff is all scuppered! H2B understands I'm disappointed but says there's no point being upset over something I can't change. Obviously I know that's logically true, but logic doesn't really come in to emotions...

Anyone else had anything spoiled  this week? I know there was at least one bride on here actually getting married this weekend, really hope it doesn't affect you if you're reading this!