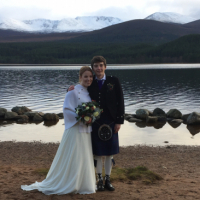 So it’s a bit of an unusual time to be posting but I’m currently in a hostel surrounded by snorers and so it seems as good a time as any.

The wedding is in just over 4 months and I’m just getting more anxious about it. I was never that keen on a bigger ceremony but we compromised and have about 55 people coming to a ceremony on the Loch and then the reception later and that caused upheaval enough.

I just can’t get excited or want to get into the details at all. The whole day just feels staged to me and I’m just not in for the whole being centre of attention thing. I don’t like being paraded in front of people, I don’t like the idea of saying vows in front of that many people, I don’t want toasts, cake cutting or the first dance. We have to start choosing music for the ceremony/reception and I honestly am not interested because in my mind it feels awkward.

I have come to the conclusion I’m probably not going to have much or any make up because that’s not who I am. But then there are getting ready photos which honestly, who cares about it? I don’t think I’ll look back and be like oh I remember this moment it was perfect. I don’t want people around me making a fuss of getting dressed. It’s called clothing, people wear it in preference to getting arrested in public and possibly even because we don’t want to be seen naked.

My dad keeps talking about how we are going to have a car just me and him even though I said I don’t care about cars and I want it to be us all as a family.

I just feel bad because FH is totally down for it all but doing FA about the planning which doesn’t help. He maybe pays attention for like 5 minutes and then is onto something else. He doesn’t seem to get that it’s beyond just the first dance which bothers me, it’s the whole day. He doesn’t seem keen to have a separate ceremony for just us either because it would mean not telling our parents Which I also totally get, I‘d want my parents there too, but then where is the line drawn.

I thought I was getting used to the idea but honestly all I’m excited for is the Pick ‘n’ Mix and the honeymoon and marriage. I’m actually scared I’m going to freak out on the day and not want to do it in front of all the people. This is more of a moan/overwhelming load of emotions than a post desperately needing an answer. Just feeling a bit alone in it all.