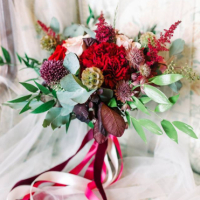 March 2019 in Emotional support
Hi girls, such an upsetting situation and I need some advice please. Be warned, it's a long story!

My parents are genuinely making me want to cancel my whole wedding, with just six months to go.

I live at the other end of the country to my parents, so I don't see them very often, and I wouldn't say I have a great relationship with them sadly. This sometimes causes problems - about 18 months ago I told them that I was sad that they didn't seem to want to visit me or spend time with me and it erupted into a huge thing, with my dad screaming and swearing at me down the phone, saying horrible things about my fiance etc., who they'd never had an issue with before. My fiance very calmly brought it up with them when we next saw them about a month later (had to travel down urgently to visit a relative in hospital) and my dad apologised and said he never meant any of it, he'd flown off the handle, temper too hot to handle etc..

We got engaged about six weeks after that, and my parents seemed blindsided by the whole thing - we got engaged on our eight-year anniversary so it wasn't really a surprise to anybody else. My fiance had been planning to ask me for months and had actually wanted to give my dad the heads-up the weekend that we visited, but after the things my dad called him, he thought better of it and decided not to (it's not like anyone else was getting a heads-up! Equality and all that!). It would never have been a call to ask for permission as neither of us are into that, I personally find it a bit offensive but each to their own.

My dad didn't come to the phone when I called to tell them our news, and a couple of days later, my mum suggested that at the wedding, my fiance and I walk in together - which we'd spoken about prior to getting engaged anyway. We loved the idea and felt relieved that she'd suggested it as we presumed that it then wouldn't be an issue when we went ahead and did it.

That was about 15 months ago now, and throughout our planning they've not been particularly excited or helpful with any of it. They're also not contributing anything and haven't offered to, even after paying a small amount towards my brother's wedding a couple of years ago, which they couldn't have gone on about more (they paid for his cake which was about £300, ours is half of that). I don't really mind, we can afford to do it without their help, but they always go on about fairness, so it seems a bit rich...

I've had my mum moaning about the venue, about the type of ceremony (a humanist ceremony), about the fact that it's in Scotland (where we live, all of our friends live, half of my family live and all of fiance's family live) instead of London where I'm from, she refused to travel to Scotland to come dress shopping but was funny with me for going without her. I'd also mentioned again in October that my fiance and I would be walking into the ceremony together and she ran off to tell my dad about it without letting me have a sensitive conversation with him, as I thought it might be something he might get a little funny about if I didn't explain it properly (he's very traditional in these kind of things and I'm not).

My dad has barely mentioned the wedding to me at all, when I visited them in November he didn't even say the word 'wedding' to me, he didn't say anything about it at all - which was especially weird given that I'd gone down to show my mum and granny my chosen dress at a local shop that also stocks it. I even said to a family member in front of him that I hoped he'd be giving a speech and he just left the room. I thought he still hated me and my fiance after him kicking off at us, nobody told me that he would be so upset, I thought he was just angry and being stroppy, and I didn't want to pander to it. I know I probably should have spoken to him then, but you can't comprehend how awkward it was to try and handle.

So we've just been getting on with things, trying to make the best of it and trying to make it lovely as much as we can. It's been really hard feeling like my parents aren't supportive or excited about it, but we've just tried to look on the bright side - my fiance's family are very excited and helping us where they can. We have six months to go and it should be a really lovely time, but my parents are ruining it for me.

I've had my mum on the phone this morning telling me that they'll be flying up and back on our wedding day because they don't want to put their dog into kennels for one night, which I got really upset about - I think understandably so? I told her that I felt upset about that and then she went full tilt ("I'll tell you who's upset!), telling me that my dad is 'devastated' about my decision to not be given away, that he's taken it as a personal slight and for him it's 'all or nothing', if he isn't giving me away then he's not making a speech, he's not wearing anything to match the bridal party, he's not being a part of it because 'I obviously don't want him there'.

She's basically told me that I'm doing the wrong thing and have made the wrong decision by having an otherwise  normal wedding and a white dress, but not being given away by him - even though she suggested it (and is now wildly backtracking on!). I know it's what she always wanted for herself and couldn't have, but she doesn't seem to appreciate that my dad and I really don't have a close relationship anymore, he's really pushed me out of his life and hugely damaged what bond we had left by being so insulting to me and to my partner and continuing to leave us out of their lives (recent example - he booked a surprise weekend for my mum's birthday, and invited my brother and sister-in-law, and some friends of theirs, but not us).

I don't want to worsen the situation but I also don't want to be held to ransom on a decision that we have made together because it feels like the right thing for us to do, for our wedding, for our marriage. My mum then told me that if I changed my mind and asked him to walk me down the aisle after all, it would actually make things worse because I hadn't wanted him to do it initially. So I'm damned if I do, and damned if I don't.

How do I fix this? I don't want such a cloud hanging over my wedding day and knowing that they're there, disapproving of everything, but I also don't want to feel like I've been backed into a corner and having to sacrifice an element of the day that felt really important to us as a couple, because it will upset someone else who doesn't seem that bothered about upsetting me. It makes me wish that we'd done what we originally wanted to do and eloped, instead of having what now feels like a big, expensive mess.

I feel so sad and empty about this, it's not how I pictured the run-up to my wedding at all - I just wanted everyone to be happy. Any advice you can give me would be greatly appreciated, thanks in advance x