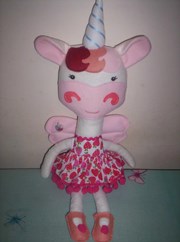 shellbob73 Posts: 3,152
July 2007 in General chat
...mine was in the very first episode of 'holiday showdown'. he was the entertainer who had to get the 2 familes playing silly games.

funny thing is, i can remember watching this with my best friend when it was first shown (before h2b & i got together) & we were laughing at how cheesy he was! little did i know that some years later i'd be marrying him!!!!!