Forum home› Archived› I got married in December 2012 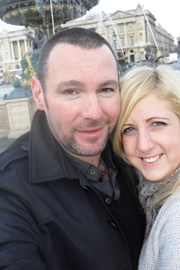 Hannahs23481 Posts: 290
October 2013 in I got married in December 2012
After months of saying I will do I'm finally doing my planning thread

I've only just learnt how to put the pictures on properly!

A little background info about myself and Jay to start with:

At the end of 2010 I suffered a breakdown, my partner of two years left me, I was in hospital for medical probs and all in all having a really sh*t time

Fast forward to May and our new neighbour is moving in....the lady who lived next door but one had said the guy that was buying her house was "quite dishy..he'd probably do for one of you two for a bit" (referring to myself and my also single next door neighbour.

Jay had moved in with his son who is six after his partner sadly passed away. the move was a new start for them. we became good friends chatting over the fence, calling in for a brew, watching films whilst the children played together. Within a couple of months we were calling round to eachothers houses 2-3 times a day but it was purely friendship. we seemed to help each other move on...

in the august, jay had planned a solo trip to america (vegas and la) jokingly i said he should be taking me with him! and lo and behold he did!! we had an amazing time, we were such great friends and it really was an amazing experience! on the flight home, we had one to many g&ts and had a bit of a drunken snog and have been inseperable ever since.

He proposed to me in the october and we planned to get married the following december.

firstly, here is my stunning engagement ring, i think he chose very well on his own, its exactly what i would have chosen for me!

me and my man