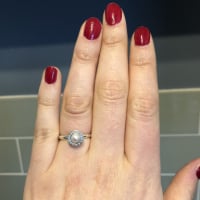 September 2019 in Planning
Is there such a thing as a wedding videographer who will come and shoot the day, and then provide you with the footage only afterwards - no edit? Reason I ask is that our budget doesn't really allow for a high quality wedding videographer but my brother is a film producer and prior to that was an editor for many years - and a very good one. He would do a great job of filming on the day but will be playing a huge part - walking me down the aisle, doing a speech etc, so wouldn't be able to. But I know he would love to edit some footage together for me as a wedding gift - and he would do a great job!
I could buy cameras and ask a friend or two to do some filming, but I feel it's a lot of responsibility for them to take on, and in all honesty I'm not sure I trust anyone to do it really well, especially after quite a few drinks. I'm also not sure we have the budget for high enough quality cameras that will pick up the sound well etc (anyone who has done this, what camera did you buy and how did it come out?). I've come across Shoot It Yourself and other companies that provide cameras for you to use and then they edit the footage, but wondered if a company that did the opposite existed. I realise it's probably unlikely, because of the risk of someone doing a bad edit job on their footage, but you never know!
I'm planning to ask my brother if he has any videographer friends that he would recommend for this, but if he does they're unlikely to be in the right area - we're getting married in West Sussex.
0