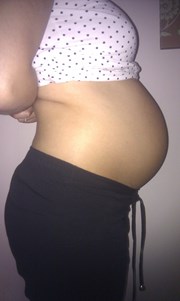 Arubababy82 Posts: 162
January 2013 in You & Your Baby
Hello ladies, my baby is 20 weeks old and I am feeding her by a mixture of breastfeeding and expressing into bottles. Unfortunately I start back to work in full time in April, just as Amelia-Rose turns 7 months. I plan to express bottles for her to be fed while I'm in work and am currently in discussions with my work re returning. There will be a lockable room and a little fridge provided for me to express and store it, but my work say they are under no legal obligation to provide me with time to express, so I'll have to use my lunch break. I trust that this position is correct, I work at a big solicitors firm who will know the legal position, but I am concerned that expressing once during the day will not be enough to provide her with bottles for the daytime (for the following day), keep my supply up and also stop my boobies getting engorged/painful/leaking, all of which I want to avoid! Has anyone who wanted to continue breastfeeding gone back to work and managed to overcome this or does anyone have any suggestions? I'd hate to have to give up breastfeeding/switch to formula just because I can't afford to stay home from work