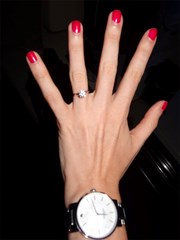 So, I'm recently engaged, and doing my planning bit…I have a scrap book full of ideas, but thought I'd start a planning thread on here to look back on everything at a later date! I'm relatively new to posting on here, so let me tell you about my OH and I!

My OH and I both work for the police (He's an officer and I'm a civilian). I decided that I wanted to try my hand at being an officer, and emailed lots of police stations in my force asking them if I could go on an attachment for a couple of days with them. Everyone told me no, apart from one. So off I went to that station to be shown the ropes during two shifts in two days. This is where our stories differ, my OH will tell you that he ate half of my sandwich on my first day there, and that we had a conversation in the canteen, I don't remember this bit (although don't doubt for a second that he ate half my sandwich!). My story begins on my second day, where I was out in a car with two ladies. One of the ladies went home sick, so my OH drove her home. I decided I'd had enough of being a pretend police officer, and that I'd just stick with my job, and tried to sneak out to go home. In doing so, I bumped into my OH, who made me go out with him and his colleague in the van for a bit. We spoke non stop (I felt so sorry for the lady that came out with us, she couldn't get a word in edgeways!), but because I was sitting in the back of the van, and it was night time, I didn't actually see what he looked like. I had been single at that time for 3 months (after walking out on my controlling ex six weeks before our wedding), so I wasn't really looking to be attracted to anyone at that time. It was quite nice to just talk and get to know someone so well without caring what they looked like and if i'd find them attractive! At the end of the night, as I was getting out of the van, he asked for my name (we were talking so animatedly for so long that we hadn't even exchanged those!), I noted down his shoulder number and left. I never thought I'd speak to him again. The next day, I had a friend request on Facebook from a name I didn't know. Because of problems with my ex, I automatically declined anyone I didn't recognise. After declining, and getting more from the same person, I decided to look up his name at work…it was him! We spoke non stop, and eventually went out on a date. It lasted about 6 weeks, before it fizzled out. We saw each other on and off occasionally a couple more times after that, but nothing was serious…I certainly didn't see myself engaged to him! After spending a month apart while I swanned off to Australia, we decided that we really liked each other and to make a proper go of things. 6 years later, and a few bumps along the way…here we are!