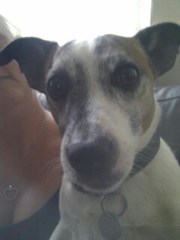 Well ive been on this forum for about a year now ive read lots of planning threads and really enjoyed them im on here every day so thought with less than 3 months to go i would have a go at writing my own , its just a place where i can put everything down together and know what ive done (it wont get lost like all the bits of paper i seem to have scattered about ! ) ,

We have both been married before OH was young and stupid  (hes older now at least !) he really just married because of the kids he has 3 so in the end they parted , my marriage just really fell apart and neither of us even now can say what went wrong . My son was almost 4 when we split and i decided i didnt want another relationship anytime soon so i spent 5 years on my own ,my friend joined a dating website (and found her now husband ) so i thought i would have a go didnt even own a computer back then, i chatted with people but nobody stuck out but it was a laugh and it was nice to chat from the comfort of my own home .

In Oct 2006 i got a like so i thought i would check him out his messages made no sense what so ever ( i thought he was drunk everytime he sent me a message ) after a few days i asked are you drunk ? no came the reply ive got  dyslexia

but we kept in touch as we got on so well , a couple of days later he told me he was single and could we meet ,our first date was on 3rd Nov 2006 so we arranged it and the rest they say is history .

We had been together about 6 months when i noticed something not quite right this feeling went on for a few weeks till he eventually told me his business had to close (he was self employed ) he made the decision one weekend rather than go bankrupt he sold everything he owned cars, motorbikes , house , furniture everything went he managed to walk away with no debts but all he had was the  dog a TV and a fridgefreezer

i took the dog and the TV the freezer went into storage (my house wasnt big enough ) it never occured to either of us about moving in together as we hadnt been with each other that long , he moved into his mates hole (thats a nice word for the state of the place ). he was really lucky after 200 job applications he managed to get a job and after a few months rented a small house .

We carried on our relationship every weekend it was a 45 mile trip there so we did alternate weekends at each others this went on for 18 months then he started hinting about me moving in with him , i cut him short there was no way i would move my son out of a really good school to go to the ones near him (they all have a bad reputation ) also i work for a small family company so i couldnt transfer so id be without work and he didnt want to leave his family as he saw his kids most nights , so we hit a stale mate.