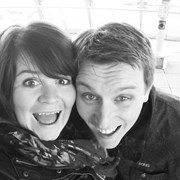 ) I decided that it is time to make a start on my special Planning thread so I don't forget any little details when I want to look back...so here goes!

We had both been in long term relationships before that hadn't worked out; had gone travelling, moved around the country and generally enjoyed our early 20's and then decided that it would be nice to find that special someone to start that next chapter with...
I had moved to a new town (Leamington Spa) and N had recently returned to his parent's house in Northampton after travelling and working in Australia. We started talking online at first (his younger sister is the same age as me and we have mutual friends from my University where I had actually met her at a 21st party) and after just 2 weeks of talking both knew we wanted to get to know each other more!

Our first proper one2one"date" was just 3 days before Valentines Day in 2012. We met in Leicester as it was half way between his parents' house where he was living, and my parent's house whom I was visiting, and decided that as we both shared a love of Rugby, that we should go and find somewhere to watch the Rugby World Cup (England Vs Italy) and have a drink (so romantic!!!!!!!!!)

Now what N didn't realise is that I am actually rather passionate about Castrogiavanni (he still played for Leicester Tigers' at the time), and most of the date he spent laughing at me as I tried to push past large men in the pub to watch him on the pitch (then he got injured and was sent off

good news for N though!!!)
We had a lovely time and after the game realised that neither of us wanted to leave yet so decided to go for something to eat, ending up at Nandos as it was snowing, cold, dark and near to the cars!! (such a romantic first date right...especially trying to decide what to eat that wouldn't be completely inappropriate and leave me with grease over my face!?!)

By this point, it had started to snow heavily and as we both had longish journeys on motorways to do, we decided to call it a night with promises of "talking soon".

I hate this bit. Will they text/ Do I text first? Will I appear desperate...oh gosh!