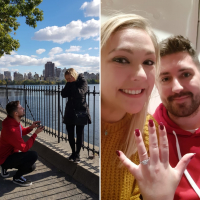 January 2019 in Your planning threads

Got engaged in October and my fiancé and I have always talked about getting married abroad.
We are already having a few discussions about who to invite. We both come from large families and I think it would be best to either invite all our family (125 not including friends) or keep it small and cheap and have immediate family only (total 17) and have a party at home.  That is the reason we will be having it abroad is to keep it cheap.
My fiancé thinks it's okay to be selective about who to invite, whereas I think it's rude. Can I have your opinions please? I am at a loss