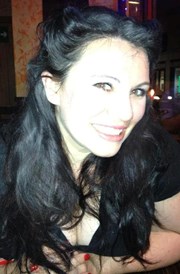 I know I don't get married for just under two weeks but sod it, my nails are drying and if I use anymore cleaning fluid on my flat, I might not have a flat left...

Before meeting P, I didn't really do long term relationships. I think the longest someone held on to me, before I broke up with them, was 10 months. They were all truly lovely men (for the most part!) and would make someone, the loveliest husband but they were not the men for me. I was often called fussy by friends and family but why should you put up with something less than perfect? So I held out for Mr Darcy/Mr Thornton/Mr Rochester*Delete as applicable*.

It was hard. I honestly started to believe it would never happen and I can remember one of my bridesmaids sitting with me at the Gypsy Moth in Greenwich, mere months before P turned up, with me fretting over a pint of IPA, and her saying that if you believe in fairytales, a fairytale will happen. And dear reader... it did!

It was a stonkingly sunny 28th of June in 2008 ( I remember the date so clearly as I got paid the day before teehee!) and it was nearing the end of my NQT year at a school in Bexley. My year group partner was getting married a mere three days after the end of term and she felt that it wouldn't be the greatest idea to go out and celebrate so few days before the big day as spots and bloating are never terribly pretty! So a month early, we hit the Admiral Hardy and sat gossiping quite happily over many G&Ts when a familiar face appeared at our table asking for a chair. Bizarrely, my ex from when I was sixteen, had appeared in the same pub despite not having seen each other since we were 18! We had a brief catch up and the night took yeet another strange turn and another ex from being a teen turned up (I wasn't a complete strumpet, I promise!)

Obviously, my friend's and my conversation turned to when we were teens and growing up in South East London and where we used to go out. Being both into quite alternative music, you would have thought that we would have ended up in the same places but I guess therein lies the beauty of the size of London!

There is the most depressingly ugly building in New Cross- it is a dark shade of grey concrete, has some terribly named tribute bands and five floors of nastiness- oh yes ladies and gentleman, until this fateful night, I had never set foot in this place in my then 26 years of age! So my friend couldn't quite believe with its proximity that I had never been to the Venue and off we went, cackling in the face of some poor Irish man who asked me for a kiss, randomly!