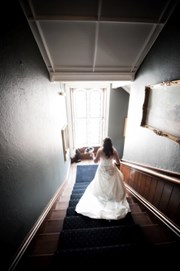 At long last I'm finally getting to write my report. I was waiting for the professional pictures to come through, which took nearly 10 weeks, and going almost straight back to work without a honeymoon and being stupidly busy sorting our house out ( with the wedding money, naturally :P)

I hope I don't bore you with the story bits - I had to shorten it down from 14,000 words, so this is the short version lol!

I'm Jen, I'm 26. I'm from Manchester originally, but went to Bangor university to study music. That was a few years ago, but 8 years on I still haven't left the area. I just love the Welsh scenery too much! It wasn't until I go a job at the university that I met Dylan though. And if I hadn't have rebelled against my parents' wishes, I would have never met him. Long story, so I won't go into that bit

but it doesn't start with him... it starts with the ex - I have to include him in this, and you'll see why below...

and one sneak picture: