I'm marrying the man of my dreams ARGHHHH!!! 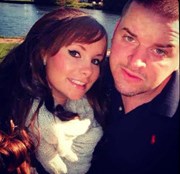 Ok, so I wasn’t going to start one of these but then I realised I was spending so much time on this website browsing and reading everyone else’s stories that I should really repay the favour and hopefully entertain others. I also am OBSESSED with wedding talk at the moment...I really don’t want to talk to anyone about anything other than WEDDING. So hopefully this can help release some of my wedding steam haha.

So I’m Christina, aged 26 and marrying my fiancé Andrew also aged 26 in December 2014. We have been together 3 years now and engaged for two of them. I hope you like our journey