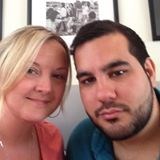 Well on sunday I found my wedding ring and we have put a deposit down on it!!

Only slight thing to tarnish the day was that when we left we got a phone call asking if we had taken the ring with us by accident. We hadn't and so I called them back to say so. The guuy was really nice but I could tell he was thinking that we had taken it. He said they would have a look on the CCTV to see if they could work out what had happened. Now the lady who had served us was really dozy and so I said to him that she had been slightly confused and it was probably worth her checked back her movements. I also asked him to call us as soon as it was found as obviously we had paid a deposit and we wanted the ring. I got a call back very quickly after to say that they had found the ring in the till and that she had put it in there with the recipt. I was really cross but in my usual way said it was ok and that I was just happy they had found it. Keep thinking about it now though and it has really upset me.

Trying to focus on the nice thought that I have my ring and I am happy with that!