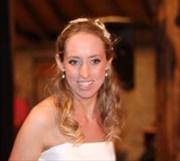 Married Pinkafro here for my report.. Photos for all, tips for those in a similar dry hire venue, some general tips for anyone getting married, and recommendations and advice for local brides (including Grittenhams

My wedding day was amazing, I could not ask for any better, but the time schedule went out the window and we made it up as we went along rather than sticking to the plan. I think people are either organised in that respect - in which case it wouldn't happen in the first place but it would drive them mad if it did, or like me have a hard time working out a schedule and sticking to timings anyway. For me it worked out fine mainly due to the photographer being so amazing and staying a little longer than he should have to compensate for my poor planning. He was a total star and possibly top of my recommended suppliers list (though its so difficult as I had some real gems). I will get to the story later though!

heres a sneaky pic from later to get things going...