The day I become Mrs Jones 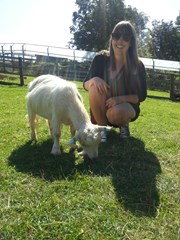 A little about us

Oli and I met back in 2007 at work. Nearly a year passed where we were simply colleagues with the odd polite word between us, until our conversations became more frequent and it was obvious that we could easily be more than friends.

I was a spring chicken at only 17 years old and Oli is nine years my elder, which meant it took some convincing on my part for us to start a relationship. However we did and we have never looked back since.