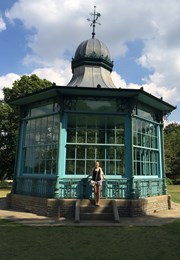 May 2018 in Your wedding reports

After a fabulous three weeks on honeymoon, we made it back home yesterday

and so I thought I'd think of happier things than work on Monday!

The first thing I want to say is accept that something will go wrong on your wedding day and somehow it'll all work out and you just won't care. I used to see people write this and think to myself that all my suppliers are prepped and so nothing could go wrong. Well read on and you'll discover the issues we had!

The second thing is to choose your wedding party carefully, especially if you are having two venues and therefore no overall coordinator of your wedding. Really think about who will pull through for you on the day and take it seriously and not just want to have a big party. Whilst that's great, at the end of the day, it's about your marriage and just the party. Most (!) of our wedding party were fantastic but in particular our best man was absolutely out of this world and we are forever in his debt.

Right, now I've got the preachy bit out of the way, onto the good stuff!


INTROS
These were covered in my planning thread but just as a recap:

Bride and groom - Helen and Andy

Background - We met on the graduate scheme at a financial company on the 6th August 2007 and never really looked back. We started rented a house together in April 2009 and then bought our house in July 2013.

The proposal - I was thinking about proposing on the 29th Feb 2016 with a watch as ever since I've known him, Andy has been killing himself for either an Omega or Tag watch. This went down the pan however when he beat me to it in July 2015! He had tried to propose a few times - the first time he tied the ring around the cat's (aka our baby) neck but having done so, she just sat down. This never happens, she's usually all over me in a morning so he took the ring off for fear of her swallowing it!! That evening we'd decided to have an impromptu BBQ just the two of us and so off he went to get the ring but by the time he came back downstairs, I was asleep on the settee. His final attempt was going to be at a picnic we'd decided to do that weekend but on the thurs I realised I'd double booked and so rather than cancel, I invited our friends to come with us on the picnic. This was the final straw for him and so as I was busy telling him this in bed, he pretty much threw the ring at me with words not dissimilar to 'I'm sick of thinking about this, just take it!!'

Venues -
Weston Park bandstand following by the reception at Foxholes Farm. We decided we didn't want to get married in a hotel or church and fancied doing something a bit quirky. After thinking about it for a grand total of three days, we booked the bandstand! In our defence, we did a similar thing when we bought our house and so it must be a sign of when we know something is right (sometimes subconsciously), we don't hang around! The bandstand is a totally outside venue with no inside option and so we then spent the next two years worrying about the weather, especially when the 2nd Sept 2016 was utterly dire. We went for a walk in the forest and I remember crying my way around the walk whilst the rain hammered down!